2.5 million Christians were murdered and some burned alive in the genocide in Turkey over many years during and after world war 1. Their slogan was “Turkey for the Turks.”

The fleets of America, Britain & France were in the bay of the Bosporus Sea but did nothing about the genocide ethnic cleansing because they were keen on gaining deals in oil with Turkey.

Today there are only 2% Christians left in Turkey.

Andre & Mimie de Jager, from Harvester Pretoria, accompanied us on the trip. Nola suggested I try to go to Baku, the place I dreamt about recently, because it is not too far from Istanbul. Istanbul is an amazing city with 19 million residents. We stayed near the old town to see all the historic places like the Blue Mosque, Topkapi Palace and Grand Bazaar. The variety of food, baklava, and Turkish delight is enticing. Turkish coffee and tea varieties are very tasty.

We decided to go and see the seven churches of the book of Revelations on and to walk in Paul’s footsteps. He travelled 10,000 miles on foot and suffered much persecution, stoning & imprisonment. He also suffered many diseases and was bitten by a viper. He also contracted an ophthalmic eye-disease.

Somehow the cold weather of Turkey also infected my eyes. I could hardly see out of my eyes. They were sore, bloodshot and swollen. Nola remarked: ‘you don’t have to take the Bible so literally to follow in Paul’s footsteps!’ But at least I fulfilled that Scripture as well. We travelled 1,200 km by rental car to visit all seven churches.

Meanings of the seven cities and modern Turkish names:

They lost their first love and were encouraged to regain it or else their lamp stand would be removed and the church would cease to exist. There were false apostles among them that taught false doctrines. John the beloved Apostle took Mary the mother of Jesus to live in Ephesus until they both passed away.

The Judaizers or Jews that wanted the Gospel to be a Jewish Gospel excluding the Gentiles slandered the believers in Smyrna. Christians were thrown into jail and executed. The Lord encouraged them to be faithful to death and they would receive the crown of life.

They held onto the truth concerning salvation on but watered down the morals in the church according to the advice the prophet Balaam gave Balak against Israel allowing intermarriage with idolatrous nations to bring God’s wrath onto Israel.

They allowed Jezebel who taught sacrifice to idols and sexual immorality. The Lord warned them against her false teaching. Unless they repent, the Lord said he would even kill their children.

The church was not a strong church but they kept the Word of God and did not deny His Name. The Lord opened a door for them to experience into another dimension of living by faith. Where brothers dwell together in unity God commands His blessing.

This was a rich church and they thought they did not need anything, but the Lord told them they are poor and blind and naked. They might be financially rich but spiritually bankrupt. That made them lukewarm. Pamukkale, is a natural spring water source that is lukewarm. The Lord warned them unless they repent He would spew them out of His mouth. Where lay people rule the church, their spiritual status diminishes. God appoints spiritual leaders and Jesus administers the ministry gifts to edify and train the believers for the work of the ministry. 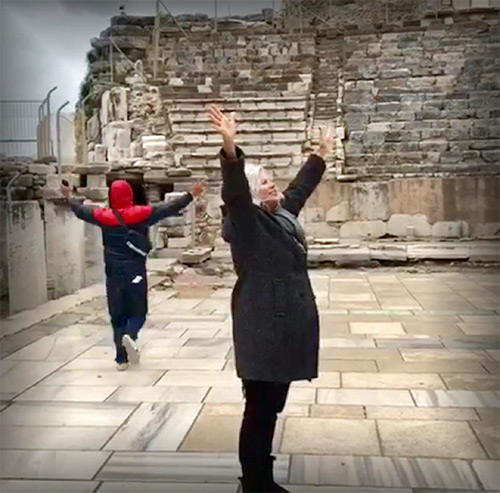 All that is left of these ancient cities are ruins. Earthquakes & wars mostly destroyed them. Nola said: ‘only God could have done this to destroy all the idols and the temples of idol worship.’ She stood in the Temple built by Hadrian the Roman Emperor that ruled in Ephesus and boldly declared: ‘Jesus is Lord!’ Domitian, the first Roman Emperor, insisted to be called ‘God the Lord’. His temple was also in Ephesus. Paul did not only face the goddess Diana, but also the imperial cult that worship the emperor. Domitian was later assassinated.

Mimie had a word of knowledge: ‘footstep’. It was a fitting description for our trip. It is our first footstep into the Middle East.

In the Grand Market Nola met a salesman that gave us the address of a church nearby so we visited that church on the first Sunday. It was a traditional Armenian Baptist Church. The Pastor allowed Nola & I to speak and Nola also sang acapella without any musical accompaniment. I shared about the joy in believing. Afterwards the worship team gathered around Nola who taught them as much as she could and also gave her Worship Manuals and Harvester Songbook to them as gifts.

I got an online e-visa for Azerbaijan within 3 hours and bought a ticket to Baku, the capital. I was thoroughly surprised by the ultra- modern city. It is prosperous because of oil and natural gas development. The people speak both Azerbaican & Russian. It used to be part of Russia. I made contact with a Pastor but they already had a visiting speaker for the day.

South Africa has just sealed a new relationship in commerce with Azerbaijan during the week I was there. The Formula 1 race will soon take place in Baku as well.

I uttered the words I said in my dream about Baku in the city: ‘Jesu Baku!’ 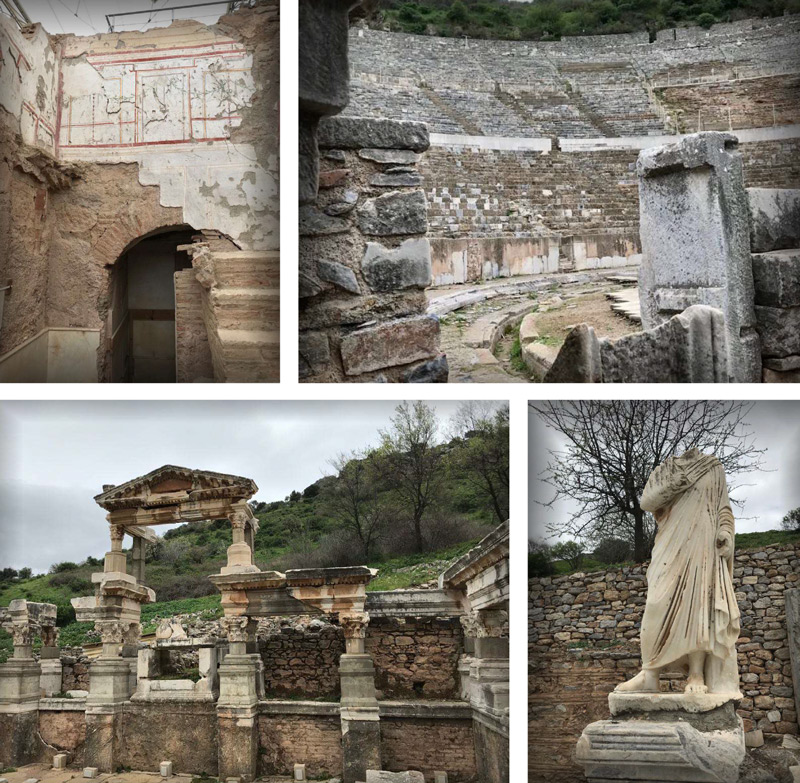 Apostle Hilton wants to fulfill the prophecy that “a camera man will follow Apostle Andre around the world” and document this move of God making films and documentaries. He is currently raising funds for his film making course in June-July 2018. To help with this, email your proof of payment to the Harvester account marked “Media” to: [email protected]

Partner with us in Missions

This site uses Akismet to reduce spam. Learn how your comment data is processed.